By and for people with Parkinson's 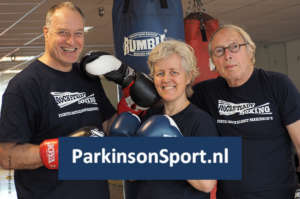 New concept for sports with Parkinson's is a hit

When you are diagnosed with Parkinson's Disease, the neurologist will prescribe three things: pills, lifestyle, and sports. You get those pills at the pharmacy. Lifestyle is harder as we all know that "old habits that hard", that is, we don't just learn a new lifestyle that way.

But how about Sport and Exercise?

In our area in the Netherlands, “het Gooi”, these are roughly the demographic numbers: around 600 people with parkinsons live in this area, all of whom would really need to exercise 3 to 5 times a week for 1 hour at a time, according to international recommendations*.

That amounts to 1,800 to 3,000 sports hours per week in our area. For the Netherlands as a whole, that would amount to 50,000 to 250,000 exercise hours per week. But where can you enjoy sports if you have Parkinson's disease and you can no longer practice your "own" team sport or individual sport as you are used to?

45 years of field hockey and then what?

For example, you have been playing field hockey for 45 years, but due to Parkinson’s you have lost the ability to play the way you used to. So you’ve got to say goodbye to field hockey and the social life that comes with it. But although you may have lost the speed and agility to play field hockey, you will definitely not lose your 45 years of sports experience. Imagine being a fanatic surfer, but Parkinson’s derives you of the balance technique you need to remain standing upright on that on that board. Yet, you remain an athlete.  Where can the field hockeyer and the surfer continue exercising with Parkinson’s?

The three of us sat at the kitchen table between Christmas and New Year's Eve: two hockey players and a DIY athlete, all three with Parkinson's. And we wondered why it was so hard for so many gyms to implement a 100% Parkinson's program. And with the question came the answer: because they (fortunately) do not have Parkinson's disease themselves, because they (fortunately) do not often experience it from close by, because there are practically no sports programs for people with Parkinson's available yet and because most people won’t have the unstoppable drive (and pure necessity) to do sports, like we do. And with a slap on that kitchen table, we committed ourselves to a simple and unique plan: we, 3 friends with Parkinson’s, we can do it and we will do it. Less than a month later, our tiny ParkinsonSport.nl association was a fact. Without subsidy, without a gym, without a sports program, without materials, but with an almost Olympic ambition to succeed.

This was the easy bit. Boxing it would be. We knew the Rock Steady Boxing program well and two of us had succesfully completed the RSB Online Coach Certification in October 2018. Rock Steady Boxing (RSB) is an American non-contact boxing program for people with Parkinson's. The RSB program is almost 13 years ago was set up by a boxer and an athlete with Parkinson's. They more or less accidently discovered the benefits of boxing for people with Parkinson’s. Boxing is a versatile sport, which is why it fits so well with the versatility of Parkinson's disease.

Of all the sports, boxing is the sport with the most athletic characteristics: strength, speed, responsiveness, eye-hand-foot coordination, focus, endurance, multi-tasking and agility. What's more, RSB is suitable for almost anyone with Parkinson's, regardless of the severity of the symptoms. RSB is also a social sport: you help each other, you are all ‘in the same boat’, you do not have to explain to each other what it is like to have Parkinson's. RSB has now grown into a scientifically based boxing program **, with over 800 "Affiliates", worldwide.

You can’t just jump in and start training people with Parkinson’s. Next to the Coach Certification Training, you have to complete the international "Affiliate Certification Training". The RSB parent organization in Indianapolis is strict, and rightly so. If you want to set up the RSB program seriously, you have to make sure you’ve got the right certificates. So in March 2019 two of our three coaches went off to the RSB training centre in Oslo, Norway. It wasn’t cheap ($ 1,750), but it was definitely worth the money and it was great fun on top of that. On March 17, 2019, less than 90 days after that talk at the kitchen table, our RSB Het Gooi Affiliate was a fact. We are now train with 15 boxers, 50% women, 50% men, ranging from 50 to 75 years of age. We’re training twice a week, 90 minutes per session, at Coronel Sports in Huizen.

As an RSB Affiliate you get access to the closed Facebook RSB Affiliate Forum and to the RSB education platform, providing videos, research and legal documents. The annual fee is USD 800, but it’s worth every penny. Think of instructions to do assessments, such as balance tests, speed tests and cognitive exercises. We do these assessments ourselves with each of our boxers. As an Affiliate you need this info to be able to modify exercises if needed. We

We make sure our training sessions are varied, consisting of about 50% boxing workouts and 50% functional fitness exercises. We prepare every training to the minute, including modifications for people who are dealing with relatively severe symptoms. To be able to do this, we rely on RSB material, as well as on professional literature on sport and fitness.

Various studies have already shown that RSB boxing program really works for pwp. If you participate in RSB classes, you are likely to ‘regain’ some of the quality of life that Parkinson’s took away from you. Your balance, posture, gait, general fitness and social well-being greatly benefit from RSB..

The BBC World Service Radio (75 million listeners) will soon be broadcasting a series about Parkinson's, featuring Michael J. Fox, Alan Alda, Paul Mayhew Archer and Mariëtte Robijn. The BBC especially visited a ParkinsonSport.nl RSB class, to learn about the unique concept of ParkinsonSport.nl: "for and by people with Parkinson’s”.

We ‘re working hard with our team of boxers to maintain and further build on the success of our ParkinsonSport.nl association. We received some very welcome financial support from the Dutch bank ‘Rabobank’. For our classes, we have been offered a great sponsor deal to use the boxing zones of our local gym Coronel Sports.

Later in the year we expect to be able to offer four 90-minute training sessions per week, with a total of 5 RSB Coaches. For us this is proof that our concept works: we’re doing this together, we’re here to help each other and we are independent.